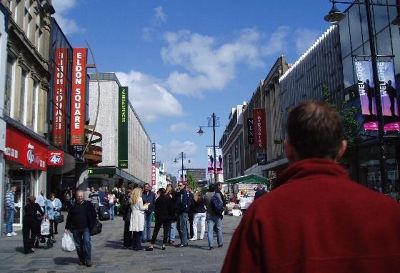 This is Newcastle’s main shopping street. It developed north of the city walls as the main route to Northumberland, hence the name, and was at one time primarily a residential suburb. When the Tyne Bridge opened in 1928 it lined up with Pilgrim Street, the southern extension of Northumberland Street, with the result that this became Newcastle's principal commercial street, a role originally intended for Grey Street. It was also, until the opening of the Central Motorway in the 1970s (which serves as a bypass), the main thoroughfare for traffic through the city. It has since been pedestrianised and given over entirely to the pursuit of shopping. 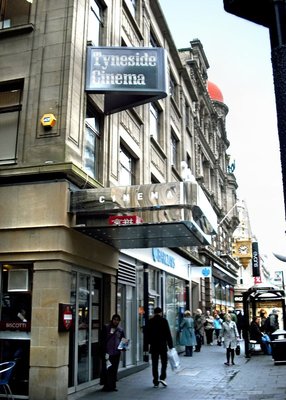 If you love film you’ll want to visit the Tyneside Cinema on Pilgrim Street, the continuation of Northumberland Street. The building that houses it dates back to 1937 and its design reflects the spirit of those times, when a ‘picture palace’ was expected to transport audiences out of their humdrum lives into an exotic world where anything was possible. Nowadays its modern cinema, with four auditoria, focuses mainly on art films and world cinema, although mainstream releases are also shown. But this is more than just a cinema. There is a wide programme of events for film buffs, such as talks, quiz evenings and special screenings, and other cultural events including exhibitions, poetry evenings, live music and much more.

The Tyneside Cinema was originally built as Newcastle’s News Theatre in 1937 and today is the finest surviving news reel cinema in Britain. These news theatres were very popular in their day and did an important job at a time when there was no television news, bringing images from all over the world to ordinary people back home. My mother-in-law once told me that when she and my father-in-law were ‘courting’ in the 1950s, a visit to the news theatre here was a cheap and popular evening out. For a few pennies they could watch not only the news-reels but also some cartoons and a travelogue or two. 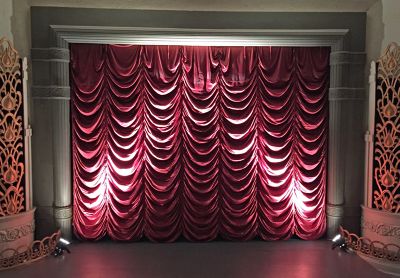 If you are interested in the history of the building you can take a free guided tour behind the scenes. We haven’t yet done this, but it’s on my “things I must do some time soon” list! This is also a good place to come for a meal, and the traditional ‘Tyneside Coffee Rooms’ on the second floor has been a popular spot with film-goers and others for 70 years. The four auditoria are licensed too, so you can easily enjoy a drink and a film at the same time. Attached to the cinema on the ground floor are two further eating/drinking options. Little Vicolo is a cosy spot, popular for day-time drinking, with excellent coffee, a good selection of beers and wines, cocktails, and also light meals. The newer Tyneside Bar & Café has become one of our favourite spots at any time of day – breakfast coffee and croissants, a mid-morning espresso, lunch or later. They have a programme of film-themed evening events including free screenings of old classics and a film quiz. 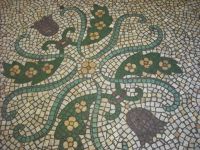 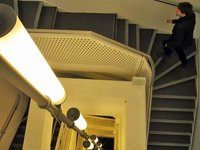 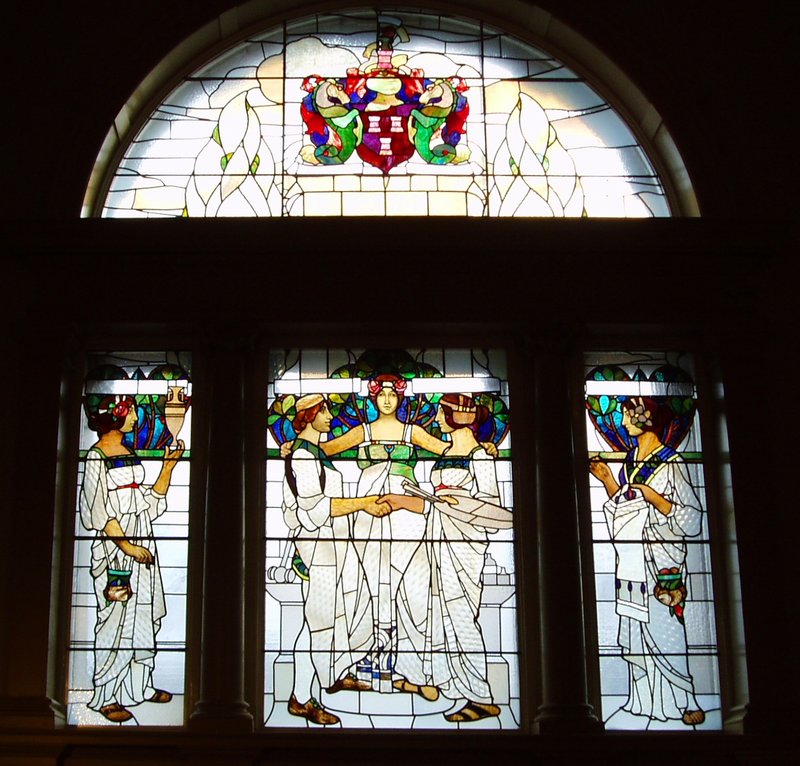 Several interesting sights lie just to the east of Northumberland Street, off New Bridge Street. The Laing Art Gallery is Newcastle’s city centre art gallery. It contains a mix of permanent exhibits, focusing on the 18th and 19th centuries, and temporary exhibitions. Although not large the gallery is worth a visit as the pictures are well displayed and there are several items of note in the permanent collections. These include a number of paintings by John Martin, a north east artist from the early to mid 19th century. His work was incredibly popular at the time and I have a soft spot for his dramatic and Romantic style. The Laing’s collection of his work is considered one of the most comprehensive in the world. 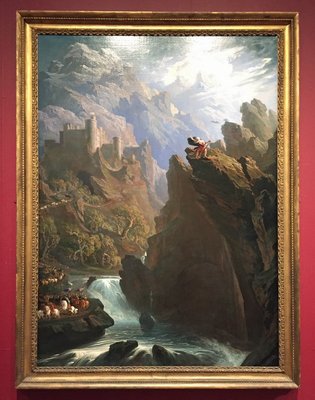 One of the paintings by John Martin in the permanent collection

Other star attractions include a bronze figure by Henry Moore, works by Pre-Raphaelite artists Burne-Jones and Holman Hunt, a Gauguin landscape and some striking stained glass, such as the Arts and Crafts window in my photo above, by J Edgar Mitchell. One gallery focuses on Art on Tyneside and includes an extensive collection of wood-engravings by local 18th century artist Thomas Bewick.

The temporary exhibits change regularly and are very varied – we’ve seen a great Biba exhibition in the past and I also recall an interesting installation reflecting on the slave trade by Benin artist Romuald Hazoumé. Most recently (winter 2017/18) the Laing has hosted an excellent exhibition of the work of British artist Paul Nash. 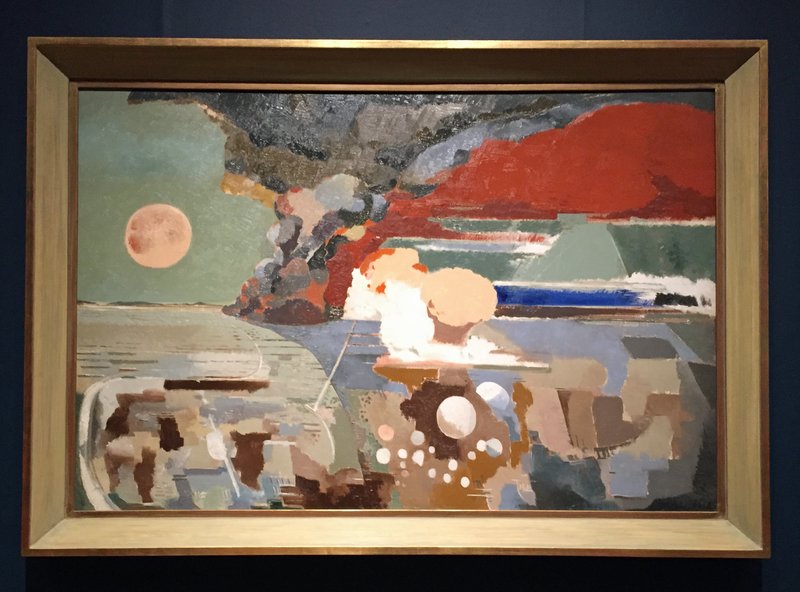 Battle of Germany, by Paul Nash

There are regular events for children, a small area aimed at under-fives (where they are encouraged to learn about art through play), a café and a shop with some high-quality items such as jewellery, ceramics and prints. 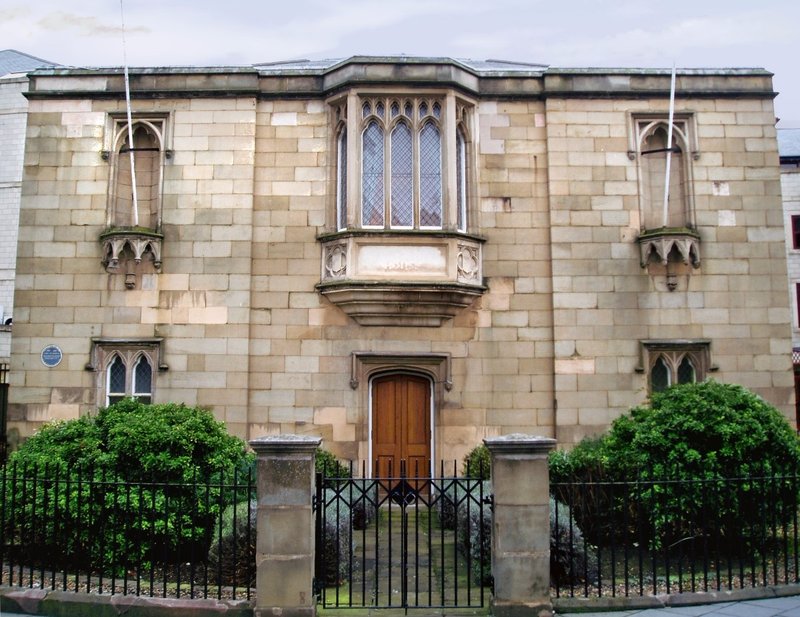 I have often passed this attractive stone building when visiting the Laing Art Gallery, which it faces across a pedestrianised stretch of New Bridge Street. But I have only recently got around to investigating its history. It was built in 1826 (in sandstone ashlar with a slate roof) as an asylum for poor pregnant women, designed (free of charge) by eminent local architect John Dobson (after whom the street that crosses New Bridge Street near here was named). It was paid for by charitable donations on land made available for the purpose by the Corporation of Newcastle, hence Dobson giving his time for free. But if the mention of charity suggests that this was a refuge for the most desperate, that was far from being the case, as those thought of as morally beyond help (the so-called ‘fallen women’ who could not show a marriage certificate) were turned away, as were the homeless and those suffering from infectious diseases. Women had to bring a dress for the child and show proof that they had a permanent address (unless their husband was a serving soldier or sailor). Only the ‘respectable poor’ were welcome here, it seems. But the building was in use for this purpose until 1923, so clearly many women did find shelter here.

Plaque on the wall

I found the following description of the building’s layout in an 1827 history of the city, published on British History Online:
‘On the right hand side of the entrance is a waiting hall, 16 feet by 12½ feet. This communicates by a door with the committee-room, which is 25 feet in length, and 16 feet in breadth. The next apartment is the surgeon's room. On the opposite side are the matron's sitting-room, a store-room, two kitchens, and a wash-house, which is annexed to the main building. In the upper floor are two large, light, airy wards, which hold four beds each; and two smaller wards, adapted for two beds each; with the matron's bed-room, store-rooms, water-closet, and other conveniences.’

The same website goes on to point out that despite efforts to ‘discourage the breeding of the industrious classes, the old English feeling of kindness and benevolence to the poor has been pleasingly evinced in Newcastle’, which gives some indication of the sentiments of the day!

From 1925 to 1988 this was Newcastle’s Broadcasting House, until the BBC moved its regional operations to a building on Barrack Road that is known locally as ‘The Pink Palace’. It is now owned by the Newcastle Building Society who use it for offices. 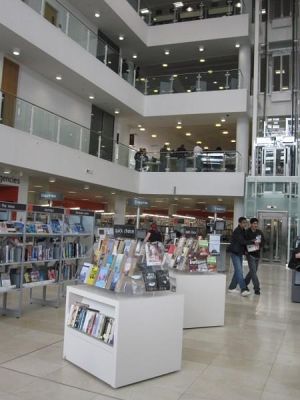 In the City Library

Although I am a librarian by profession I don’t very often find myself recommending a visit to the library in my travel writing! But the new City Library in Newcastle is a stunner, and well worth a little of your time.

The library opened in summer 2009 and has been a great success. Officially named the Charles Avison Building after the 18th century Newcastle composer, most refer to it as just the central or city library. It is housed in a six storey block full of light and air, which replaced the old concrete 1970s building. There are entrances on New Bridge Street and Princess Square – the latter is perhaps more convenient if coming from the city centre, but the former will give you the more striking first view of this impressive building. Look up through the atrium to its many levels; watch how people move and feel at home in its spaces; sense the buzz of enthusiasm and activity too rarely associated with library use (though it should be!)

Then take some time to explore. There are naturally all the usual library offerings: books to borrow (probably of limited interest to short-term visitors); newspapers and magazines (could be a good way to pass some time on a rainy day) and free computers and free wifi. But there are also some real draws for visitors. Check out the small area on the sixth floor, where several beautiful historic illustrated books are on display, as well as tools and a desk used by famed local wood engraver, Thomas Bewick. 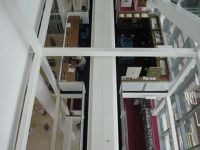 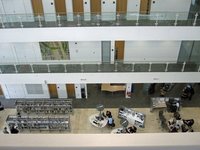 Views from the upper floors

Enjoy a coffee and home-made cake in the café on the second floor, in a pleasant area overlooking Princess Square (and with tables outside too for a sunny day). And have a look to see if there are any interesting events or activities planned: there are regular author talks, book signings, exhibitions and activities for children. If you want to find out in advance what’s going on at the time of your visit, have a look at the calendar on the Newcastle Libraries website, but bear in mind that it covers all the libraries in Newcastle, so you’ll need to check what’s on where. 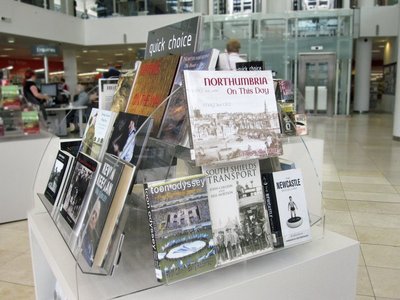 Books with local interest on display

By the way, two friends of ours, Pete Cain and Barry Robertson, wrote Toon Odyssey, featured in the display in the photo above, and I was proud to supply some of the photos. It describes our adventures following Newcastle United in Europe ... but we will get on to the matter of the football team in a later entry ...

Well done, Sarah! Northumberland Street is enticing. Love the J Edgar Mitchell window at the Laing. And much more.
I had just watched the Remembrance Day ceremonies held in Ottawa when I attempted to comment here earlier. It's always quite moving and I was a bit teary-eyed... Reading about the Lying-in Hospital moved me some more. But it made me hopeful finally... time and lessons learned have changed many old customs and views.
To finish on a cheerful note, I would love the Tyneside Cinema! Thanks for this good entry!

Lou, the Tyneside is fantastic and if we lived in Newcastle we would definitely become members!

I wonder why it was called the 'Lying-in" Hospital - seems an odd name.

Your logical reference to why the Northhumberland Road is so named reminded me of something which has perplexed me nearly all my life.... Why is the Dublin Road out of Enniskillen so called when it leads to Belfast?

'Lying-in' was the phrase used when women used to stay in bed for some days (or even weeks) after giving birth, which was believed necessary on medical grounds