Of monks and newer communities

The west side of the city 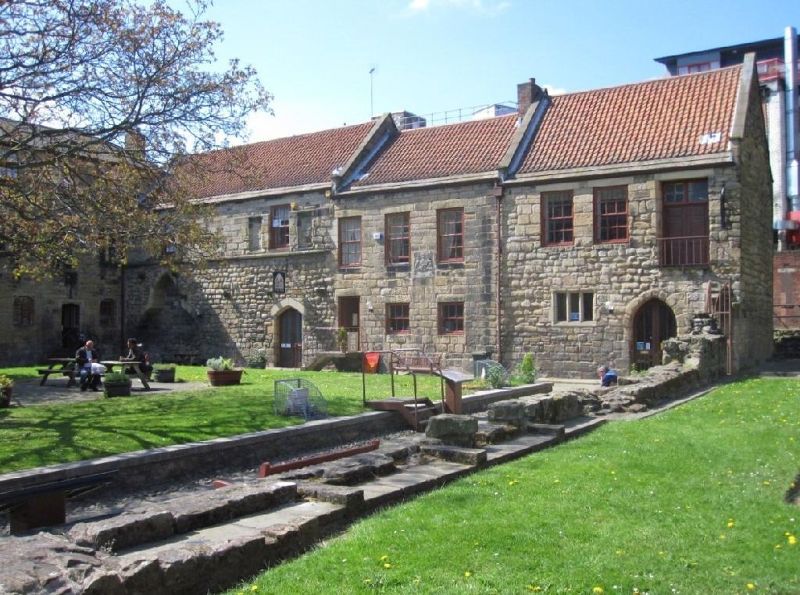 Tucked away behind the popular Gate entertainment complex is this lovely peaceful haven amid the bustle of the city. A grassy square dotted with traces of ruined buildings is surrounded on three sides by the remains of the Black Friars Monastery that gives it its name, and on the remaining side (where once the church stood) by more modern buildings that have been sensitively designed to blend in with the surroundings. 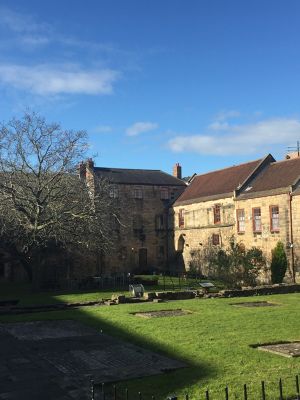 The monastery was originally founded in 1239 by a small group of Dominican friars from Spain. They wore black tunics, hence the name “Black Friars”. The city granted them land on which to build a church, the monastery buildings and to grow crops. Their peaceful lives here were disturbed briefly in 1265, when the threat of raids from Scotland led the city council to build a wall around the city – and right through the Dominicans’ garden!

As the monastery grew, so did its importance, and over the years several kings stayed here, including Edwards the 2nd and 3rd. But in 1539 another king, Henry 8th, famously broke with the Catholic Church and closed down all the religious orders in the country. The church here was destroyed but the remaining monastery buildings remained.

They were subsequently bought by the city council and leased to local craft companies: bakers, brewers, butchers, saddlers, tailors and others each took space here. They held their meetings, housed their poor and grew vegetables in the cloister garden. 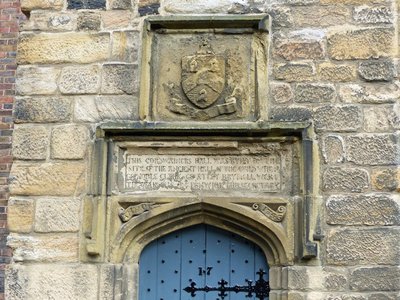 But in the 20th century the guilds moved out and the buildings fell into decline. In the 1960s much of the city centre was redeveloped following the rather brash pattern of that decade, paying little heed to history or tradition. Blackfriars was scheduled to go the way of many other old buildings, but escaped the bulldozers. In the 1970s the council had a change of heart, and with the help of various interested bodies saved and restored the complex. It was reopened by the Queen in 1981. And the Freemen of the crafts companies continue to meet here, as they have for over 400 years.

Today the old monastery buildings house a restaurant and a small number of interesting shops, including an artisan bakery, glass studio and knitting shop. The modern additions include apartments and space for small, mostly arts/media orientated, businesses.

The restaurant claims to be ‘the oldest dining room in the UK’ and is one of our favourites. It occupies the friary’s former refectory which maybe justifies that claim. We have developed a tradition in recent years of coming here for our New Year’s Eve dinner as unlike many of Newcastle’s better restaurants there is no rip-off hike in prices that evening, and no unwanted ‘entertainment’. What is more, the menu is always delicious, with a strong emphasis on locally sourced food. On a chilly New Year’s Eve it is always very cosy and welcoming, and the service equally so, despite this being the liveliest evening in Tyneside’s calendar. 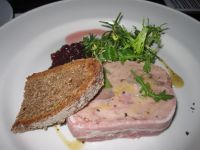 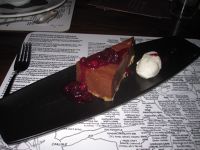 For one of the most striking examples of how Newcastle offers ‘something for everyone’ you have only to exit the tranquil courtyard of the Blackfriars complex by its north-east corner, along Dispensary Lane and Low Friar Street, which opens on to Newgate Street by the Gate. This claims to be ‘Newcastle’s premier leisure and entertainment centre’ and certainly tries its best to live up to that hype. Under its one roof you will find bars, restaurants, a 12 screen cinema and even a casino. During the day its restaurants and cafés are a good place to meet friends – indeed the Gate’s advertising slogan when it first opened was ‘Meet at the Gate’. 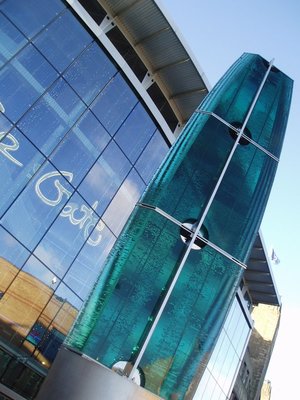 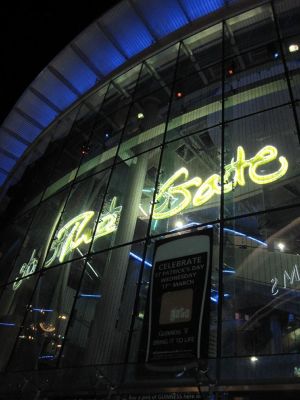 The Gate by day and by night

Be warned – if you come here at night, especially Friday or Saturday, you’ll find yourself in ‘party central’. Newcastle didn’t get its reputation as the party capital of Europe for nothing, and while the traditional venues around the Bigg Market, and the more recent ones on the Quayside, still attract the majority of revellers, there are plenty left to fill the bars of the Gate and to spill onto the streets outside. If you aren’t prepared to run the gauntlet of Stags and Hens sporting strange attire and reeling under the influence of too much alcohol, perhaps you should stay away. But the crowds are largely (in our experience) harmless, and police look on in mild amusement most of the time, so this shouldn’t put you off unless you are of a very nervous disposition – although those of you who are, like us, of a ‘certain age’ may feel yourselves very out of place in any of the bars after about 8.00 PM! 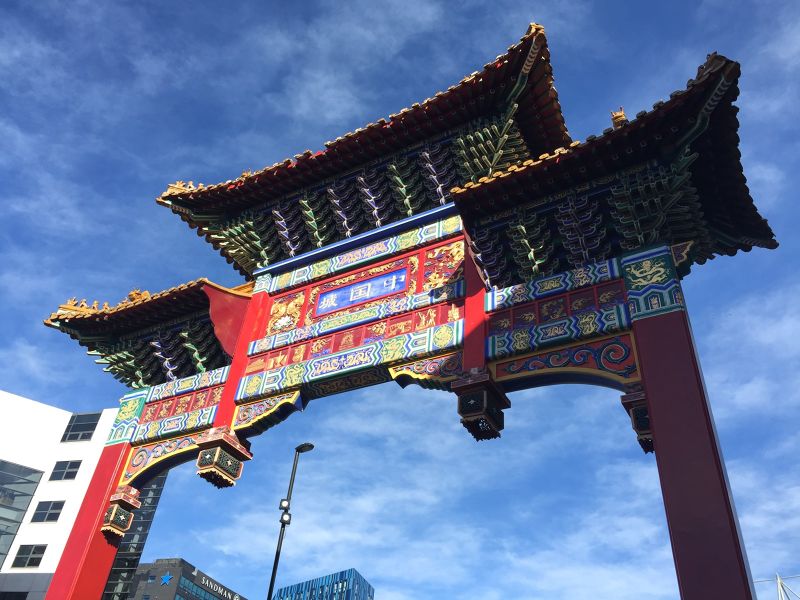 Newcastle’s small Chinatown centres on Stowell Street to the west of the city centre and just south of St James’ Park. It is home to many Chinese restaurants and a few supermarkets. While small compared to those in other cities it is worth a visit to get a feel for a different aspect to the city, to see the impressive Chinese gate, and of course to eat.

While there have been Chinese inhabitants in Newcastle for decades (it is after all a port city), and Chinese restaurants since the middle of the twentieth century, it was only in the late 1970s that Stowell Street acquired its first Chinese supermarket, swiftly followed by a number of restaurants. And it is relatively recently that the street and the immediate area around it have taken on the by-now expected trappings of a “Chinatown” – signs in Chinese, street lamps designed to look like lanterns, and of course an impressive entrance gate – in this case at the north end of Stowell Street, opposite St James’ Park. This was built in 2004 by craftsmen in Shanghai. It is 11 metres tall and is flanked by two Chinese guardian lions. 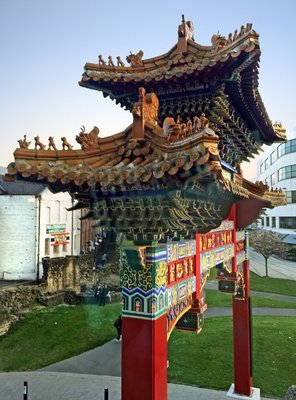 View of the gate from the neighbouring Irish Centre

Other streets that form part of Chinatown and are worth exploring include Charlotte Square, Low Friar Street and others in the area around and to the south of Blackfriars. 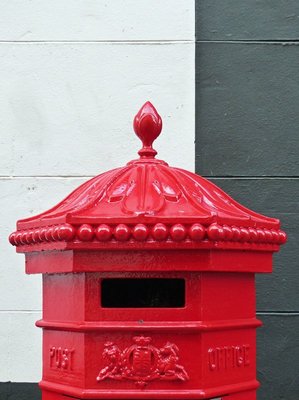 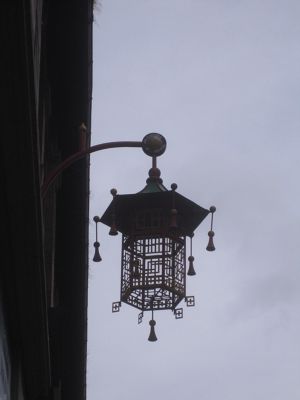 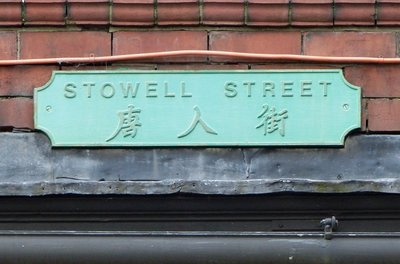 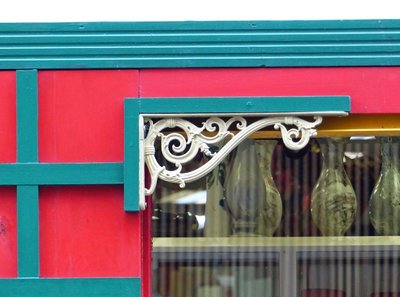 At the top of Stowell Street near the Chinese Gate and just opposite St James' Park football stadium, another group of immigrants to Newcastle have their unofficial home. This is the Irish Centre, where members and their guests enjoy reasonably priced drinks in its two bars, live football and other sporting events on the big screen (matches involving Glasgow's Celtic are as popular here as those played by Newcastle United, I gather) and frequent musical entertainment. We have visited with friends on a number of occasions - usually for a concert but once for a party hosted here by a friend. As a visitor you usually need to be signed in by a member, but if there's something on that especially appeals it would be worth asking the friendly staff if there's a possibility of admission as they seem pretty casual about the whole membership thing, in our experience! 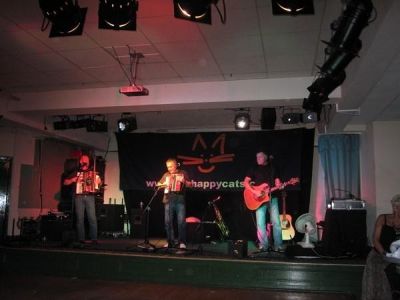 Just south of Stowell Street you can follow one of the more extensive stretches of the old town wall to the Westgate Road, where a few other sights might catch your eye. 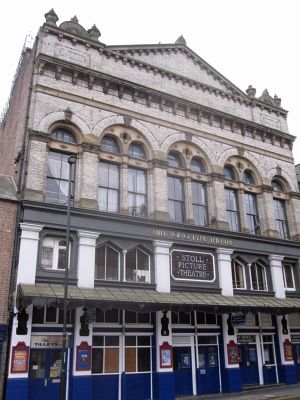 This is a very distinctive and historic building. It was built in 1867 as the Tyne Theatre and Opera House in an Italianate style. As well as plays, it hosted Sunday lectures with speakers as diverse as Oscar Wilde and William Gladstone (at the end of his career, aged 82), while Sarah Bernhardt performed here on three occasions. Other famous actors to have appeared here include Sir Henry Irving, Dame Ellen Terry, Mrs Patrick Campbell and Herbert Tree.

After the First World War cinema became much more popular than live theatre, and in 1919 the Tyne Theatre and Opera House was taken over by the Stoll cinema company. Their name still appears on the front and is the one often used by locals when talking about the theatre. This was the first cinema in Newcastle to show 'talkies', opening with 'Tarzan of the Apes', while the last film to be shown here, 'Danish Bed and Board' in March 1974, perfectly demonstrates how interest in going to the cinema declined in the UK during the Sixties and Seventies – the Stoll had attempted to save itself by catering to the emerging market for X-rated 'blue' movies. But it didn’t work, and the cinema closed its doors. It remained closed for three years, during which time it was leased by the Tyne Theatre Trust and restored to its former function as a live theatre – indeed, during the restoration process, when the cinema screen was removed, the original stage and stage machinery were discovered hidden behind it, complete with the set of the last play to have been performed here.

The theatre reopened in 1977 and among the famous names to have appeared here during the following years, the highlight was probably Placido Domingo in a performance of Tosca. In 1985 a fire caused significant damage, exacerbated by a storm in January 1986 during repair work. But again the theatre was reopened and has continued to operate, despite some challenges, under a succession of different owners.

Today it is properly known as the Tyne Theatre (although as I said, locals usually refer to it as the Stoll), and hosts variety performances, children’s shows, comedy, ballet, musicals, concerts and live performances. We have never been to a show here but after researching for this review I would love to do so if only to see the interior, which still retains many of its original features. 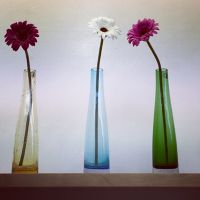 I imagine that relatively few visitors to the city ever stumble across this place, which is a shame. Part shop, part gallery, part events space, and with a café too – lots to enjoy here.

To deal with the various elements in turn, the shop is in two parts. Firstly, it is a treasure trove of materials for artists and crafts enthusiasts, selling paints, brushes, papers, craft materials and kits etc. Secondly, in a separate section, it showcases and sells the work of local crafts people and those from further afield in the UK – paintings, jewellery, pottery and more.

The gallery has changing exhibitions (although the website is sadly out of date in listing these) and hosts events such as talks by exhibiting artists, and also workshops and art courses.

Attached to the gallery is a café, selling hot and cold light meals, beer and wine, soft drinks and hot ones. It has some outside seating in the courtyard for when the weather is fine, and more inside for when it is not! 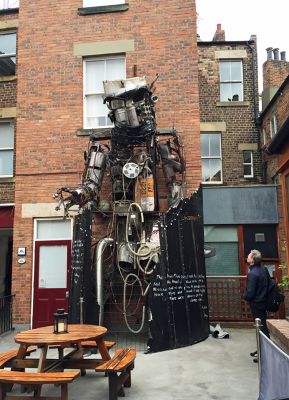 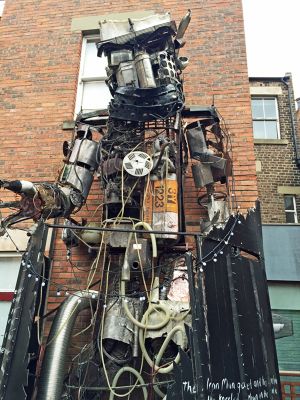 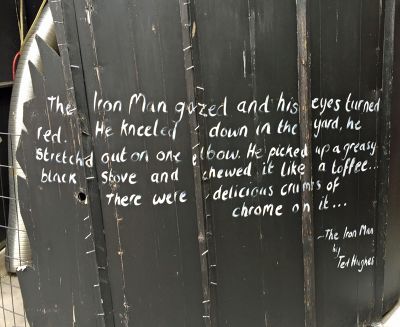 The courtyard itself, known as Black Swan Court, is also interesting in its own right for the large sculpture of the Iron Man (a character in a children’s book by Ted Hughes) made from junk. Opening off this is the Black Swan arts venue which hosts music events and can be hired for parties etc. There really is a surprising amount of space and variety of interesting activities here, almost hidden away off Westgate Road! 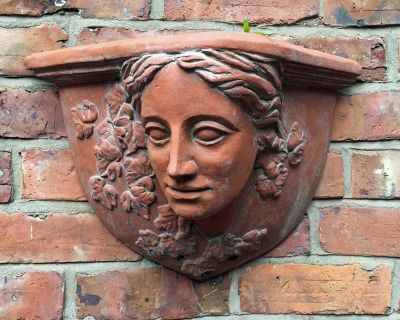 The restaurant at Blackfriars looks super. Loved the Iron Man as I had never heard of him/it. "delicious crumbs of chrome . . . " Funny.

Thank you both. Sally, that's one of our two favourite restaurants in Newcastle - always a treat to eat there! I discovered 'The Iron Man' years ago when working as a children's librarian, and it's a brilliant kids' book. Have a look at this if you'd like to see more: https://www.bbc.co.uk/education/clips/z878q6f

Lots of very interesting history here and the food at the Blackfriars restaurant looks delicious.