Around Haymarket and beyond

At the northern end of Newcastle’s main shopping street, Northumberland Street, is the Haymarket. This was once exactly what its name suggests, an agricultural market, and before that a parade ground for volunteer soldiers, but the space is now dominated by the bus station (on the site of the former market) and metro station, recently modernised. 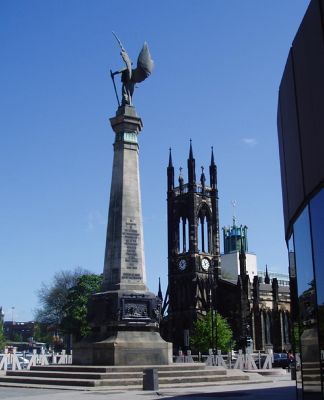 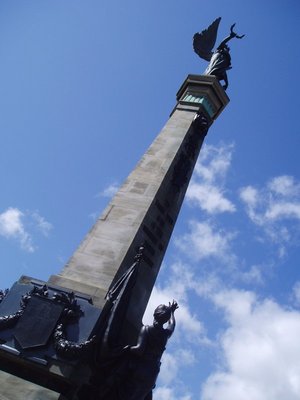 On the pedestrianised area around the latter is the South Africa War Memorial, erected in 1907 to honour those who died in the Boer War. The column is 70 feet (21.5 metres high, and at its top stands a figure of Winged Victory, based on Nike of Samothrace (an ancient Greek sculpture discovered in 1863). This is popularly referred to as the 'Dirty Angel' by locals, despite having been cleaned up some years ago. 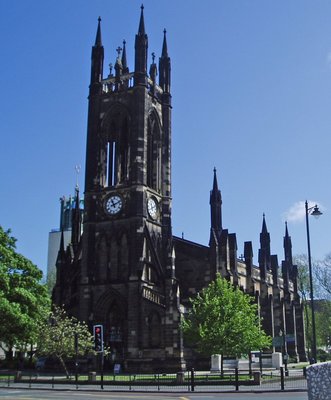 Other nearby landmarks include the church of St Thomas the Martyr, designed by local architect John Dobson and built in 1839. It stands on the site of a medieval chapel, traditionally said to have been created by one of the murderers of St Thomas à Becket, Hugh de Morville – hence its dedication to that saint. Morville’s original chapel, built in atonement for his sin in killing the archbishop, stood on the banks of the Tyne near the present-day Swing Bridge but was moved to this spot to serve as a chapel for a leprosy hospital here, the Hospital of St Mary Magdalene. By 1827, having suffered through flooding and general wear and tear, it was decided the chapel should be pulled down and a new church built.

Unusually for a Church of England church, St Thomas the Martyr has no parish – the congregation having ‘deserted’ it for a new church in Jesmond back in the mid 19th century following dissatisfaction with the teachings of the then vicar. It is regarded as serving the whole city (located as it is next to the Civic Centre), the universities and various organisations and communities, and has a reputation for liberal thinking and involvement in social issues, perhaps reflecting its ties with the universities. It is also unusual in not having had its stonework sand-blasted, as have most major buildings in the city in recent decades, and therefore retaining the dark stains of past industries. I have no idea whether this has been a conscious decision or reflects a lack of either funding or inclination. 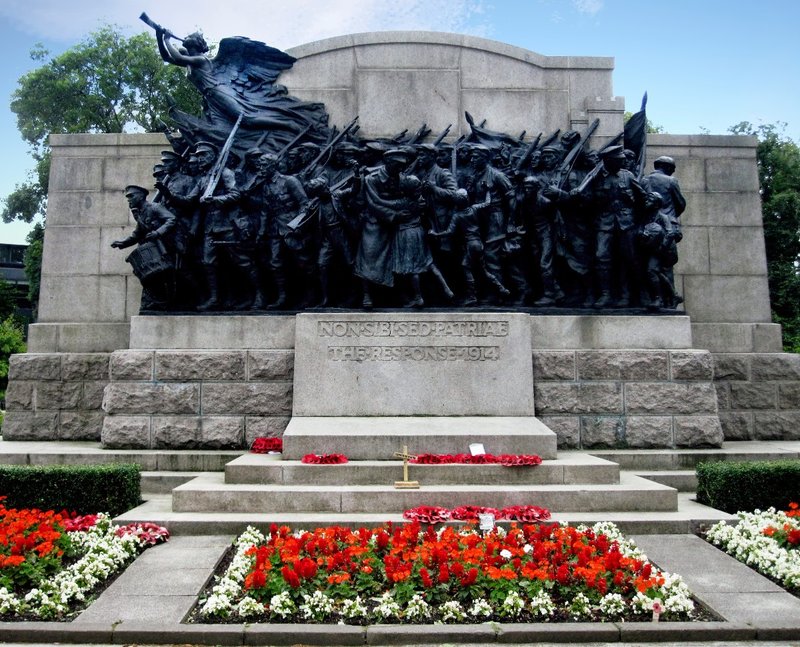 Just north of St Thomas the Martyr, and in its grounds, is the Renwick Memorial. Also known as The Response, this is one of the most impressive war memorials in the country. It was commissioned by a local couple, Sir George and Lady Renwick, and given to the city of Newcastle in 1923 to commemorate three events: the return of all five of their sons from the First World War; the raising of the Commercial Battalion of the Northumberland Fusiliers; and Sir George’s fifty years of commercial success as ship-owner in the city.

The memorial was sculpted by Sir William Goscombe John, who had studied under Rodin in Paris. It was unveiled on 5th July 1923 by the Prince of Wales. It depicts a group of soldiers marching off to war, with women and children bidding them farewell. The soldiers follow drummer boys at the front who beat their drums as they march, while high above the flag is the figure of ‘Renown’. The figures, thirty in total, are in bronze while the plinth is granite. The Latin inscription beneath the soldiers says “Non sibi sed patriae” – “not self, but country”. 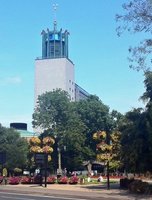 Beyond this is the city’s Civic Centre, built in 1960 to replace the Victorian Town Hall which stood in the centre of the Bigg Market (this was demolished in 1973). Look out for the ring of sea-horses encircling the tower, taken from Newcastle’s coat of arms.

Across the road (Percy Street) are a number of popular pubs, including our own pre-match favourite, the Crow’s Nest, and the Hotspur, named for the son of the First Duke of Northumberland (from the Percy family), best known for his part in attempting to overthrow Henry IV in 1403, and for his immortalisation by William Shakespeare. 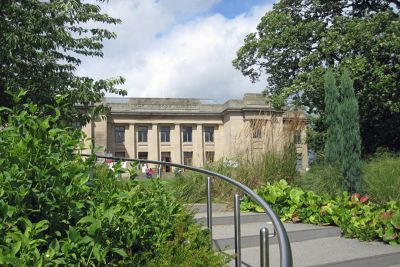 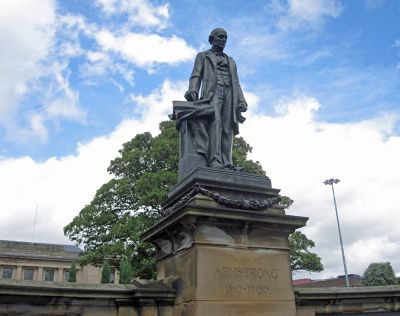 Statue of William Armstrong outside the Hancock Museum 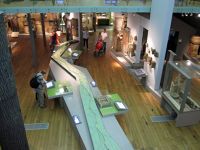 Heading north from here you pass the Hancock Museum. This museum’s main appeal, it seems to me, is to children and families. Certainly on the cool August afternoon when we visited a year or so ago, that was its main audience – the place was packed with family groups enjoying many of the very well-presented collections. These have an emphasis on the north east of England, but by no means exclusively so, and include an excellent display about Hadrian’s Wall, with a large model and a variety of people of that time (a wall builder, a centurion, a local woman, a slave etc. etc.) brought to life through images and words. Also on display in this section are a number of artefacts, including the gold Aemelia Ring, believed to be one of the earliest Christian artefacts found in Britain.

Another impressive room holds a collection of stuffed animals, which I normally don’t much like, but here they are imaginatively displayed in what is termed “Living Planet”. The elephant here, by the way, is a life-size model, but most of other creatures are stuffed, while a few, like the lizard, are still alive. 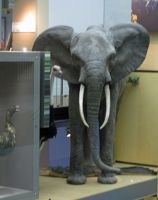 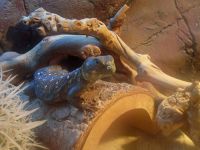 Elsewhere there are Egyptian mummies (one of which is unwrapped), a tyrannosaurus rex skeleton, objects from a wide variety of world cultures (African tribal pieces, a burial effigy from Malekula, Japanese swords and armour and a Hawaiian feather cape and helmet) and artefacts from (mostly early) British history. There is also a planetarium – the only part of the museum for which a charge is made.

If we continue further north we reach Exhibition Park (named for the Royal Jubilee Exhibition held here in 1887) and beyond it the Town Moor. The road here though is more like a motorway, despite being in the centre of a city, so walkers should strike west from the museum and enter Exhibition Park from Claremont Road, behind the university. 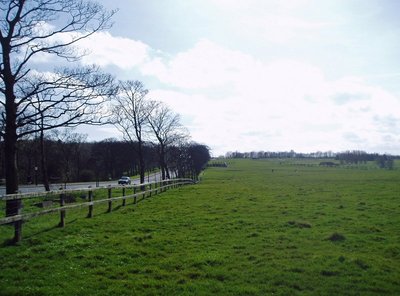 Just north of the city centre is the wide open space of the Town Moor, popular with families, dog walkers and kite flyers. Walking here you'll get a good dose of fresh air and sweeping views of the city to the south - look out for the landmarks of the Civic Centre and St James' Park football stadium. The Moor is especially appealing on a crisp winter's day, or in early spring when daffodils line the roads that criss-cross it.

The Hoppings, said to be the largest travelling funfair in Europe, is held here every year during the last week in June and is well worth a visit if you enjoy traditional fairground rides and candy floss. 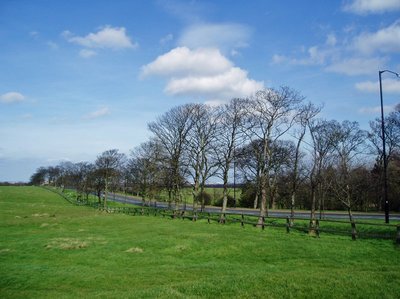 If you should ever be awarded the Freedom of Newcastle you'll be permitted to graze your cows here on the Moor. And unlike in other cities where similar rights exist, people really do take advantage of this, so don’t be surprised if you see cows grazing here so close to the city centre – and watch out for those cow pats! Honorary freemen include Bob Geldof, Nelson Mandela and of course Alan Shearer, but I have a feeling none of the cows is theirs! 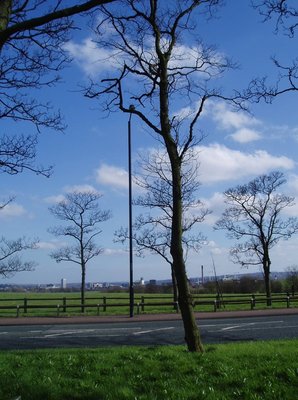 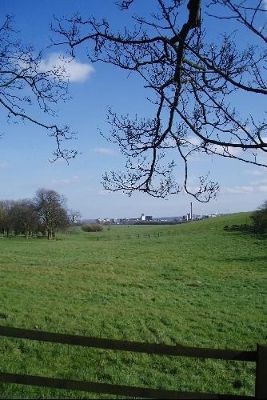 The Town Moor
Look carefully and you will spot the Civic Centre, and maybe even a glimpse of St James' Park beyond!