Around the Central Station 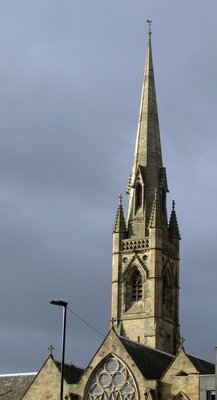 Newcastle’s Central Station lies on the southern edge of the city, between the main commercial areas and the river. As well as being an impressive structure in its own right, there are some other sights in the vicinity worth a visit.

The second of Newcastle’s cathedrals is Roman Catholic St Mary’s, near the Central Station and just south of Chinatown and Blackfriars. It was built in the Gothic revival style in the 1840s, designed by Augustus Pugin (who was also responsible for the interior of the Palace of Westminster and many other churches around the country). Its elegant spire can be seen from several vantage points in this part of the city; indeed, despite all the modern development that has taken place here, it is apparently the fifth tallest structure in Newcastle.

The interior was fully renovated a few years ago and is rather lovely, with cherubs playing musical instruments at the top of each of the columns that line the nave. There is some striking modern stained glass, including one which depicts Tyneside industry and another dedicated to local hero Adam Wakenshaw who received the Victoria Cross for gallantry after being killed in combat in 1942 in Egypt. These sit alongside more traditional windows, the modern ones having replaced those lost in World War II bombings. Other decorative features include neo-Gothic floor and wall tiles. 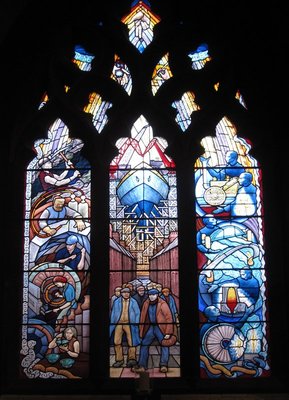 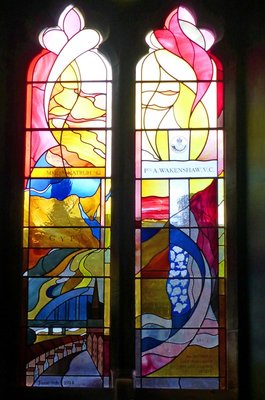 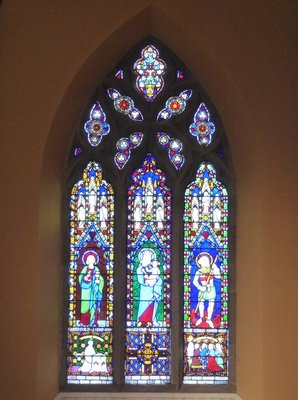 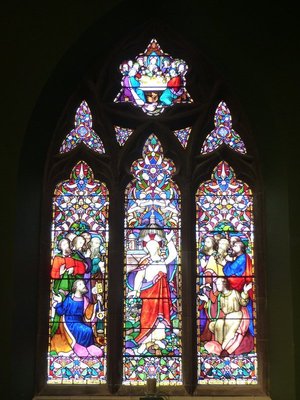 Outside there is a monument to Cardinal Basil Hume, a native of Newcastle, and a garden dedicated to him. The statue stands on a flat stone plinth in the shape of the Northumbrian Island of Lindisfarne and depicts him in the habit of a Benedictine monk – he was abbot of the English Benedictine monastery of Ampleforth Abbey for 13 years until his appointment as Archbishop of Westminster in 1976. 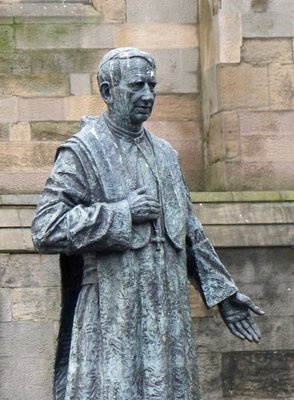 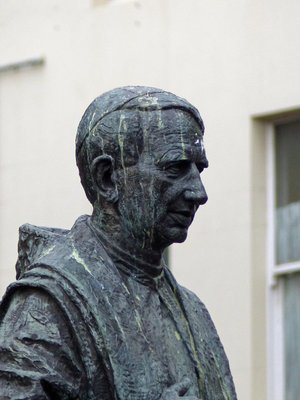 Born in Ellison Place near the Haymarket and university quarter, Cardinal Hume was, like the vast majority of Geordies, a lifelong fan of Newcastle United and once described getting an autograph from Jackie Milburn, a Newcastle United legend, as one of his ‘proudest achievements’ – quite a statement from a man who almost became pope!

The Centre for Life 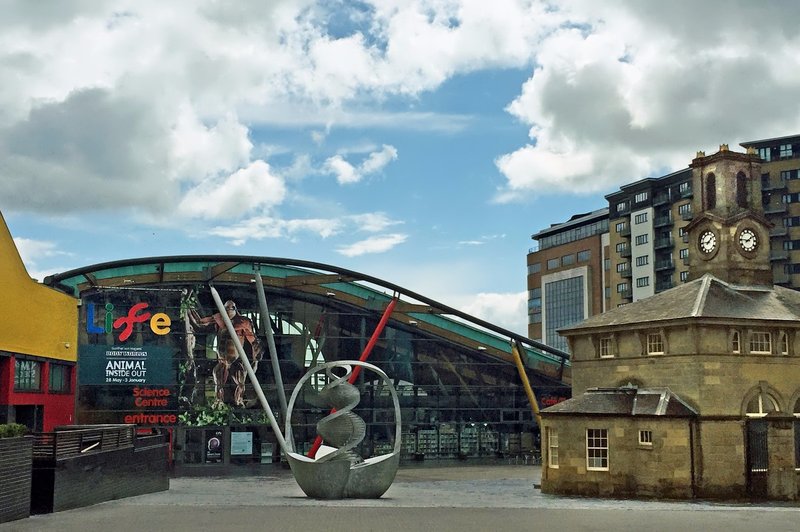 The Centre for Life

And now for a very different and much more modern building. The Centre for Life opened in 2000, and is not just a visitor attraction but a whole complex – indeed, it describes itself as a “science village”. According to the website, “almost 600 people from 35 countries work here: researchers, doctors and nurses work alongside people in the fields of education, public engagement and business”. The scientific bodies based here include Newcastle University’s Institute of Genetic Medicine; the NHS Newcastle Fertility Centre; the NHS Northern Genetics Service and several biotechnology companies. The buildings surround a public space, roughly oval in shape, known as Times Square which in the winter is home to an ice skating rink and year round to a couple of bars. The Centre for Life also has a café on this square, and in the centre is a rather out of place but lovely example of the work of architect John Dobson which thankfully was preserved when the square was developed (on the right in my photo above). What is now Times Square was once the cattle market and this building, known as the Market Keeper’s House, originally served as offices for the market keeper and the toll collector on the ground floor, as well as providing accommodation for both their families on the upper floor. Today it is available for rent as offices, though is sadly too often standing empty it seems.

Most people come here for the Science Centre exhibits. There is a strong child-friendly emphasis to these, with lots of interactive displays and experiments. One area is the Brain Zone, with lots of demonstrations of the way it can play tricks on you. Another is the Young Explorers’ Zone, aimed at young children (under seven), while the Curiosity Zone encourages slightly older ones to experiment. There is a Science Theatre with live shows programmed at intervals during the day highlighting a specific scientific theme (when we were there it was about man’s efforts to fly) and a 4D motion ride.

But we had discovered that some events and activities have a more adult bias and it was one of these that drew us here – a short film being shown in the planetarium about the Hubble telescope, marking its 25th year. This was very interesting and enjoyable – the images looked fantastic projected above our heads. 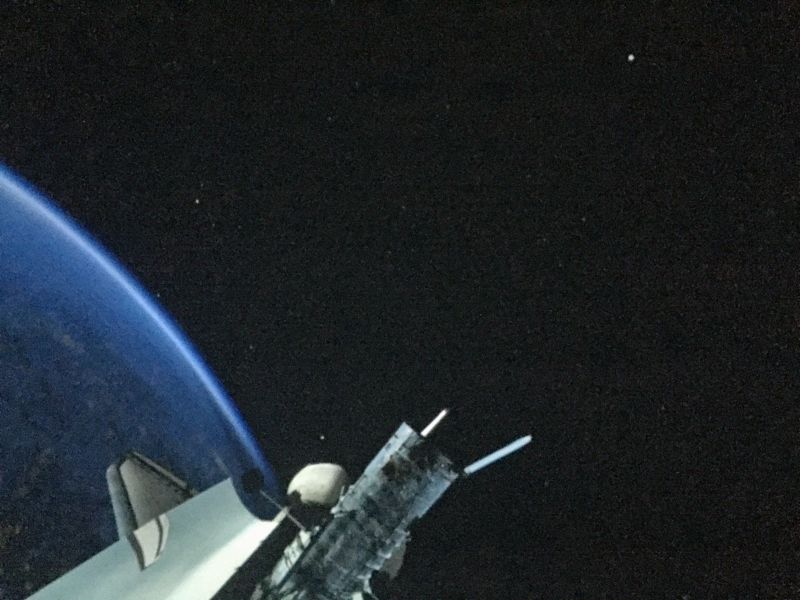 We also had a look at a temporary exhibition featuring robots from film and TV – as a Star Trek; Next Generation fan I was especially pleased to see Locutus of Borg, while Star Wars fans could meet R2-D2, C-3PO and others too. 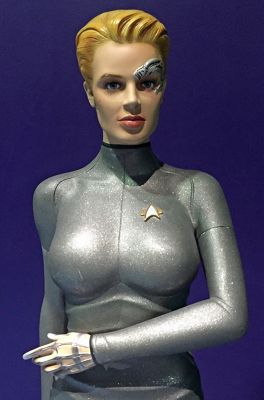 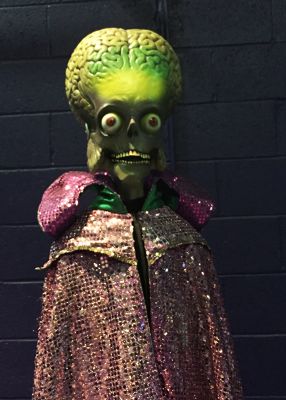 Seven of Nine, and Alien

On the whole though I came away feeling that for adults without children in tow there probably isn’t enough here to merit the fairly steep entrance fee. For families however it would be a different matter, as all the children we saw were thoroughly enjoying themselves and learning at the same time.

A short walk north west of here is a very different museum. 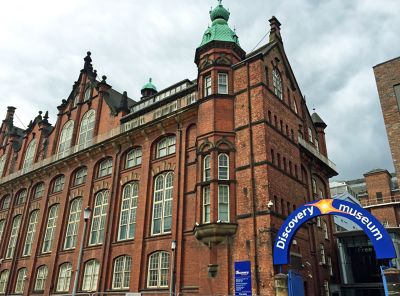 This museum (https://discoverymuseum.org.uk/) is devoted to the history of Newcastle and Tyneside, with an emphasis on science and industry. It is housed in a former Co-operative Wholesale Society warehouse, and grew out of the collections of the former Municipal Museum of Science and Industry, the first science museum outside of London, which had opened in Exhibition Park, near the Town Moor, in 1934. That museum, which we visited many years ago, closed in 1993 when this one opened. It was only recently that we got around to visiting it in its new incarnation – we should not have left it so long as this is an excellent city museum.

As soon as you enter you are greeted by the impressive sight of Turbinia, a 34 metre long ship designed in 1894 by Tyneside engineer Charles Parsons. This was the world's first steam turbine powered ship and for five years, until 1899, was the fastest ship in the world, reaching speeds of up to 34.5 knots. 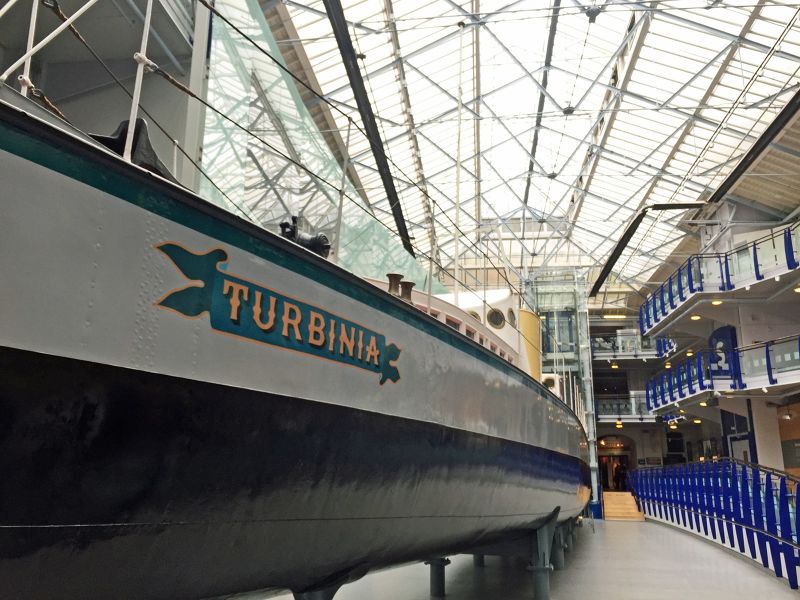 Beyond this the museum opens up, with galleries on either side spread over three floors. These include:

The Newcastle Story, which covers the history of the city from Roman times to the early 21st century. This was the main area we visited and although not large it easily kept us interested for over an hour, with displays from each of the main periods of Newcastle’s history. I especially enjoyed learning more about the development of the city as a centre for trade during medieval and Tudor times, with activity focused on and around the Quayside, and the 20th century sections, showing how the city gradually took on its present-day shape and recalling the changes I have seen personally in the 35 years since I started to visit regularly. 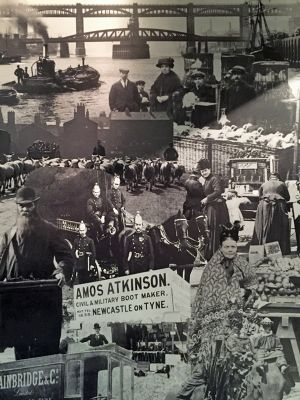 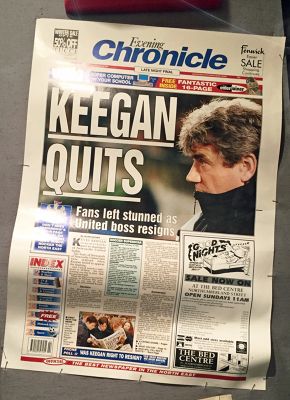 The Story of the Tyne, which focuses on the importance of the river to the development of industry and engineering here. This includes of course the impact of the shipbuilding industry but also coal mining, with the coal that was exported down the Tyne being at the heart of the city’s prosperity. 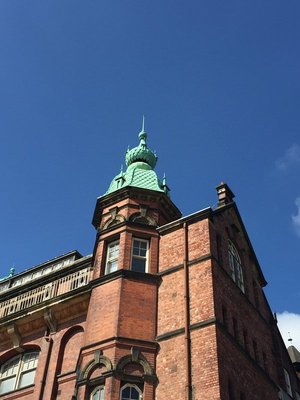 Another view of the museum

Working Lives, which tells the story of how work has changed here from the time of the Industrial Revolution to the present day.

Tyneside Challenge, looking at how various regional challenges have led to innovative solutions and inventions – the latter include the steam locomotive, Puffing Billy, developed to move coal from the collieries to the river, and the self-righting lifeboat.

Destination Tyneside, focusing on immigration to the region from the mid 19th century onwards as illustrated by the stories of real individuals – a Polish Jew escaping persecution in 1874; the Italian couple who founded what is now a Newcastle institution, Mark Toney’s ice cream parlours; a Yemeni fireman who came on a merchant ship and never left.

There are also special sections for children such as Play Tyne (water play using a model of the river) and Science Maze, with hands-on exhibits. In addition, there is a café on the top floor and a shop on the ground floor which has a mix of children’s pocket money toys, a selection of books about the region and a few good quality souvenirs such as nice mugs, pictures etc.