A city and its river 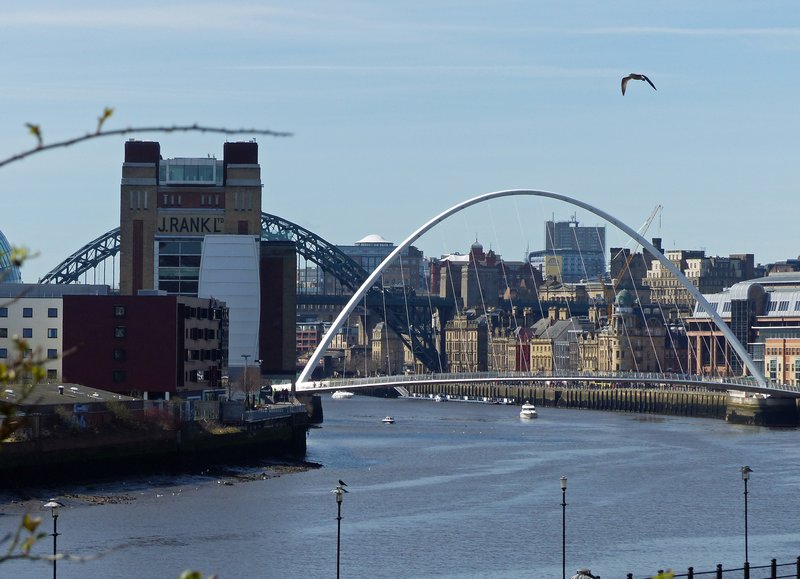 Rarely is a city defined so clearly by one single feature in the way that Newcastle is defined by its river. The city’s history has been shaped by the river, especially by ship-building, and now that the ship-yards are largely lost to history, the life of the city, especially its cultural and social life, continues to flow from the banks of the Tyne.

But the city has another heart, its football club, and that is where my love affair with Newcastle began. Well that, and with my husband and his welcoming Geordie family. I have been visiting the city now regularly for almost forty years and have gradually come to feel as at home there as I do in London, the city I have lived in almost all my life.

This will not be a usual blog, documenting the days and events of a visit, but rather an amalgam of all my visits, bringing together in one place all the sights of the city, my favourite areas and trying to capture for you the essence of this very special place.

A bit of history 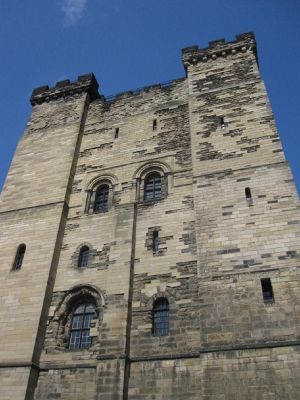 Newcastle started life as Pons Aelius, founded by the Romans at a strategic crossing point on the River Tyne. It sat near the eastern end of the defensive Hadrian’s Wall (a Newcastle suburb bears the name of Wallsend to this day). Later, William the Conqueror’s son Robert Curthose built a castle here, in 1080, giving the city the name it still bears today. Thanks to the river it became an important centre for the wool trade in medieval times, and later for ship-building – the traditional boat known as the keel comes from here.

Like many northern English cities, it reached its heyday with industrialisation, which brought great prosperity to the region. Coal from the surrounding coal fields was exported from Tyneside and its shipyards built some of the finest ships in the world.

The city expanded from the river bank up the hills to the north, with elegant streets designed by some of the best architects of the day.

The Depression of the 1930s hit Newcastle badly, and the Jarrow March of 1936 became one of the country’s defining events of that period (Jarrow is another Newcastle suburb). But industry continued to dominate the city’s economy until the late 20th century saw the closure of the shipyards on which its economy rested. In the late 1970s, when I first began to visit, it was clear that the city had seen better days – unemployment was high, the Quayside area largely derelict and many of the most attractive buildings were covered in the dark deposits laid down by centuries of coal smoke.

Efforts to modernise the city in the 1960s had had a mixed success – the dark often slum-like terraced houses that had been demolished were replaced (as in so many places) by tower blocks that divided communities, while the city itself was literally divided by the building of the Central Motorway that slices through its eastern side. 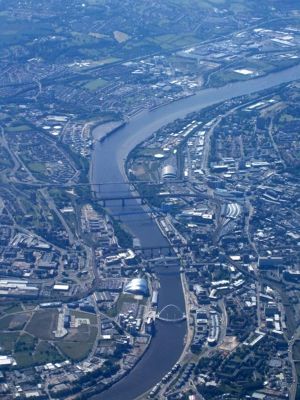 Newcastle from the air

But the city bounced back. Geordies, as the locals are called, are a resilient bunch. Government and European investment attracted new industries to take the place of the old, the quayside was redeveloped as a cultural and leisure destination (in partnership with Gateshead on the other side of the river) and the old buildings cleaned so that their beauty shone through. The city’s traditional friendliness, coupled with lower prices than many other parts of the UK, saw it become a magnet for young people looking for a good night out and it was dubbed the ‘party capital of Europe’. It also became a mecca for shoppers, with excellent city-centre shopping and in Gateshead, the then-largest shopping mall in Europe, the Metro Centre.

Today’s Newcastle is a modern, lively city with a strong sense of identity and of its own history, while looking firmly to the future. Its two universities attract students from all over the world, giving it a youthful and cosmopolitan air in parts, while other areas remain perhaps more traditionally British. Its nightlife offers something for everyone, not just the somewhat infamous ‘stags and hens’ who flock there, and there are restaurants for every taste, from the all-you-can-eat buffets of Chinatown through great inexpensive Italians to gastro-pubs and a Michelin-starred restaurant on the quayside. There are excellent cinemas, art galleries, museums and theatres. And if you tire of the city you're only a short ride by Metro from the coast, or an easy drive or bus ride from some of the most beautiful countryside in Britain.

In the following entries I will focus in more detail on some of the most interesting areas of the city, my own personal favourite spots, and say something more about the culture of this fascinating corner of England.

Although it is one of England’s most northerly cities, high speed trains mean that you can get to Newcastle in less than three hours from central London. Trains leave from Kings Cross (two an hour for most of the day) and follow a mostly scenic route, the highlight (for me at least) is the stunning view of Durham Cathedral just 15 minutes before arriving at Newcastle’s Central Station. From that station you are just a short walk from many of the city’s main attractions (including St James’ Park), or you can jump straight on the Metro to travel to more outlying areas.

Alternatives to the train include driving (it’s about 300 miles on good fast motorways); coach (the most economical and slowest option – check out National Express for details and prices); or air (Newcastle has a good international airport, with access by Metro to the city centre in about 30 minutes).

But if you do arrive by train, or find yourself at the Central Station at any point in your visit, do take a look at, and maybe have a drink in, what claims to be the most beautiful station bar in the country, and was voted 'Newcastle's most impressive watering hole' by the Observer newspaper. I haven't been able to check all the country’s station bars (!) but the Centurion would certainly be hard to beat. It started life in 1839 when it was commissioned by George Hudson (the Victorian "Railway King") to be the best first class lounge of any station in the world. The interior was designed by local architect John Dobson and is decorated with tiles made in Leeds and valued today at over £38 million! The lounge was in use until the 1960s when it closed, and the for a while the space was used by British Transport Police as holding cells. Despite its Grade 1 listed status, British Rail destroyed parts and painted over the tiles in a lurid red. 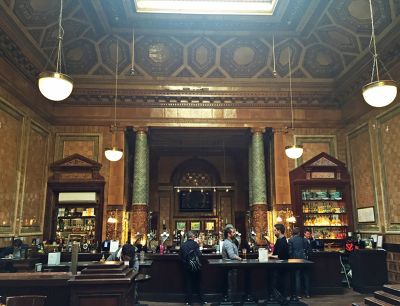 It was rescued in 2000 and restored for use as a pub, and is today one of the most popular places in the city for a drink, and an almost obligatory stop for a farewell pint for any departing Geordie. It serves a full range of the usual drinks and pub foods, and has screens showing live football and other sports, as well as occasional live music. The pub also has a deli / café attached, on the station side, selling decent sandwiches and salads etc. to eat on the premises or takeaway – useful to take on the train as they are rather superior to on board catering!

The easiest way for a visitor (or anyone else) to get around Newcastle and the Tyneside area is to take the Metro. The system is easy to use, clean, reliable and generally efficient. There are just two lines – the green one runs between the Airport to the north west of the city and South Hylton on Wearside, while the yellow runs in a “loop with a tail” to connect the coast with the city centre.

The main stations in the city centre are
Haymarket – for the Civic Centre, some good pubs (including our favourite, the Crows Nest) and the top end of Northumberland Street (start of the shopping district)
Monument – for the shops of Eldon Square and many others, the Theatre Royal and shuttle buses to the Quayside and Metro Centre
Central Station – as the name suggests, for the Central Station and mainline connections, also a fairly easy walk to the Quayside
St James – for the football stadium and also Chinatown

For a bit of extra fun, especially if travelling with small children, try to get the seat at the front of the train – you’ll get a great view ahead down the tracks and the kids can pretend to drive the train!

The only downsides to the Metro that I can see is that it doesn’t run on Bank Holidays and also that it stops running rather early at night – the last train from the city centre is before midnight even on a Saturday, and this is in the so-called “party capital” of Europe!

Hop on, hop off bus

Like most cities these days, Newcastle has a “Hop on, hop off” sightseeing bus tour available. Before deciding to take this tour however, bear in mind that Newcastle is a compact city so you might find it just as easy to explore on your own; but for anyone with mobility problems and/or very limited time, this could be a useful option.

The tour starts at the Central Station and to do the complete loop takes one hour (if you don’t hop off at all, that is!) There’s a pre-recorded English-only commentary. Stops include St James’ Park Football Stadium, Haymarket, the Quayside (including Baltic and the Sage music centre) and the Tyne Bridge.

In the entries that follow I will try to capture the essence of the city – its sights, its pubs (an integral part of the culture), its passions.